The latest data from the U.S Census Bureau and the Department of Housing and Urban Development shows new home sales down nearly 13 percent in July. But the decreasing sales numbers are a bit misleading. That's because the decline was mostly the result of a significant revision to month-before numbers. New home sales data is an estimate based on building permits and is often revised after initial reporting. In this case, after being revised upward, the June data actually shows sales were at their fastest pace since 2007. And, even after declining in July, sales of newly built homes remain 4.3 percent higher than at the same time last year. That's encouraging news for the market. Combined with increased residential construction and moderating prices, the improvement could be a sign that the housing market is gaining some momentum. One possible reason for the positive turn is lower mortgage rates. Another is lower prices. According to the report, the median sales price of new homes sold in July fell 4.5 percent. Additionally, inventory levels improved, with the supply of homes rising to 337,000 units. At the current sales rate, that's a 6.4-month supply. More here. 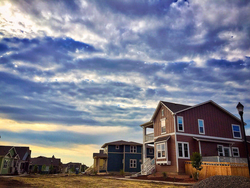